In this blog I would like to focus on Estimated Breeding Values (EBV’s) and why are they so important. In particular, how can EBVs be used to help pick which animals to buy in order to build or improve one’s herd. The main point I would like to make is that EBVs supply crucial decision-making information to a buyer, but they are only as useful as the data used to calculate them. It is important to bear in mind that the EBVs published in an auction catalogue do not indicate whether the breeder participates in the National Beef recording and Improvement scheme or how accurate the particular set of EBVs are (i.e. what data on the individual animal has actually been captured rather than inferred). As you will see below, we are doing everything we can at Vastrap to make sure the EBVs in our sale catalogue are meaningful and can be used as an extra tool to select the right animal for your herd.

Basically, when one buys a stud animal, there are three ways in which to judge the potential value of that animal to your stud. Firstly, one can look at the parentage or genotype (hence the importance of doing proper DNA parentage verification see The importance of  parentage verification through DNA testing), secondly one can look at build or phenotype and lastly one can use EBVs. In rare cases one is able to look at progeny when buying older animals. While parentage and sound functional physical attributes like muscling, leg structure, udder conformation and teat quality will always play a very important role, EBV’s can be used to complement visual screening to select animals. There are several individual EBV’s that allow a breeder to come to an informed decision about what the animal in question can offer the breeder beyond good looks.

All EBV’s are expressed as an index where 100 is the average. Where an animal’s index is below 100, then it has faired poorer than the breed average, while an index above 100 means it has faired better.

I will briefly discuss the individual EBVs below.

Our main purpose in writing this blog is to underline the importance of thorough record keeping and the supply of accurate performance data to the National Beef recording and Improvement scheme. The EBVs supply crucial decision-making information to a buyer, but they are only as useful as the data used to calculate them. It is important to bear in mind that the EBVs published in an auction catalogue do not indicate whether the breeder participates in the beef improvement scheme or how accurate the particular set of EBVs are. One can only judge this by looking at the production data on Logix (Live Stock Information and Genetic Information Exchange) to see whether any weights have been captured.

In the Boran industry, the number of breeders participating in the National Beef recording and Improvement Scheme and performance testing is still low. I am often disappointed to see that animals in which I have a strong interest at auctions do not have a single measured data point – no birth weight, no wean weight, no mother weight at weaning and certainly no 12 or 18 month weight. Without this data, no meaningful insight can be drawn about the potential future performance of the animal and one only has genetics and physical attributes on which to make a decision.

Since buying the Mollshoop Boran stud in 2011, our policy at Vastrap Boran has been to collect as accurate data as possible on every single animal, including birth weight, wean weight and the mother’s weight at weaning. We also collect 12 month and 18 month weights. In addition, since 2011 Vastrap has put 95% of its bull calves through the Studbook administered phase-D veld performance test, which provides additional important information such as testes development, muscling, meat yield and marbling to name a few (see Bull Selection and Performance Testing). Vastrap alone has contributed over 35% of all the recorded phase-D bulls tested in the Boran stud industry.

We can therefore assure you that the EBVs of Vastrap animals, even those older ones where their individual performance data was not measured, is as accurate as it can be. You can rely on the EBVs of Vastrap animals published in the Vastrap Auction sale catalogue and these EBV will provide you with an extra tool to assess the animals you like, over and above build, looks and parentage. This should help you to make a more informed decision about which animals will fit into your herd.

Below are examples of the production data and EVBs drawn from Logix for Jackie VST 12-04, and one of our three-year old bulls that went through performance testing VST 14-84. The first column of data shows all the data on the animal that has actually been measured. This data is important for the animal’s parents and their progeny, who will have EBVs based on the performance of their parents until they get their own data. 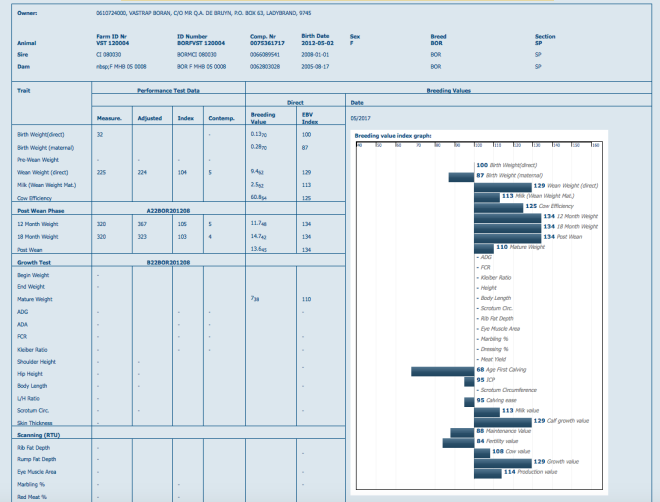 One thought on “The importance of accurate EBVs in animal selection” 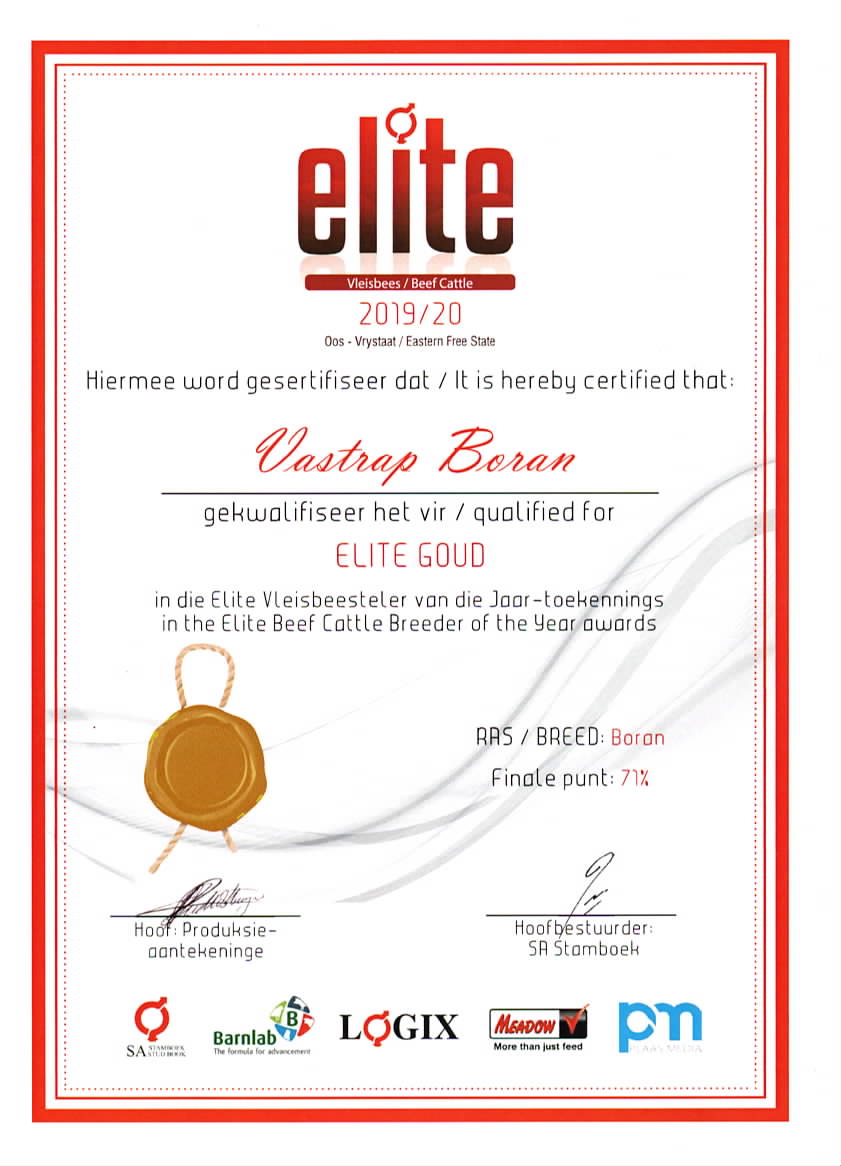 Up close with the Vastrap Boran herd

Some Appendix Boran Heifers from our upbreeding programme.
Some of our 2017 Boran heifers. They have been with the bulls for their first breeding season. First pregnancy testing will be done in April. #vastrapboran #boranheifers #boransouthafrica #borancattle
Thankful for the wonderful growing grass and the beautiful veld!
Vastrap Boran is featured in the latest Veeplaas magazine. We discuss the history of our stud, our auction philosophy and our strong belief in the value of the Boran in our commercial cross-breeding programme. Unfortunately the article is only available in Afrikaans, but we have provided links to English articles discussing the topic in more detail. Please click on the link in our profile for more information ➡️➡️