It’s been a sad few days here at Vastrap. Ashley arrived at the farm on Sunday for her monthly 10 day visit. On Monday an extremely severe cold front swept through the country causing snow fall in all nine provinces. I was in Johannesburg for a night on Monday and when I drove back to the farm on Tuesday it was starting to snow quite heavily in the city. The last time I saw snow like that in Joburg was in 1981 when I was six! Anyway, I got back to the farm and everything was covered in white. 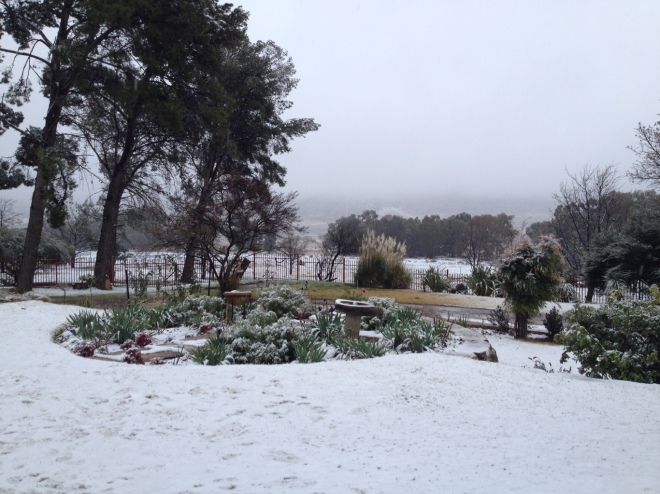 Ashley and Quentin with their snowman.

As beautiful as it was, and as much as the kids enjoyed the snow, it was not a good time for the new born little calves that I wrote about in my last post, “Calving Season has Begun!”. Quentin was extremely busy on Monday and Tuesday with the hoof smith who was checking all the bulls and cows for hoof problems and genetic faults. He didn’t have time to check on the calves until late Tuesday afternoon just after I arrived home.

He came home in a state, because the little calf that we had found in an aardvark hole on Saturday had almost frozen to death. Its tail had been eaten off by a jackal and its one eye looked like it had gone blind. He was too weak to stand and drink milk from his mother. In addition, Quentin could not find one of the calves that had been perfectly healthy on Sunday (the one with the black cow mother in the previous post) and another had died during child-birth.

Quentin brought the sopping wet calf without a tail home. We immediately put the little thing in front of the Aga stove and spent ages blow-drying it. We also tried to feed him a mixture of ideal milk, egg and milk, but he did not eat much and looked very weak and traumatised.

With Sibella and the dogs.

Trying very hard to get it to drink.

He looked okay the next day, but still wouldn’t eat much and struggled to stand. 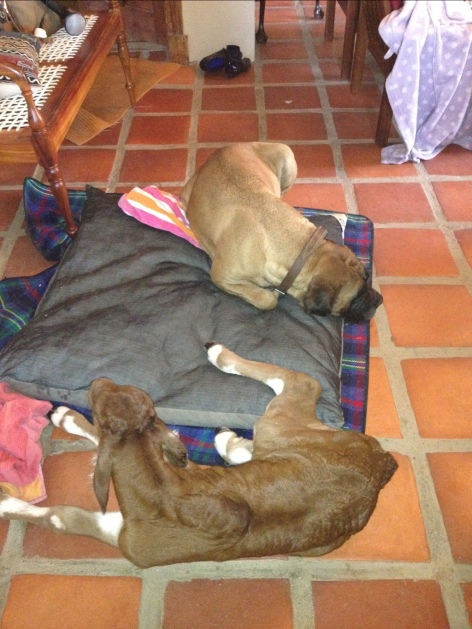 Lying in front of the warm stove with Paris.

We took him outside for a walk and a wee. The dogs were quite puzzled by this new arrival in the house and kept sniffing the wound on his tail. 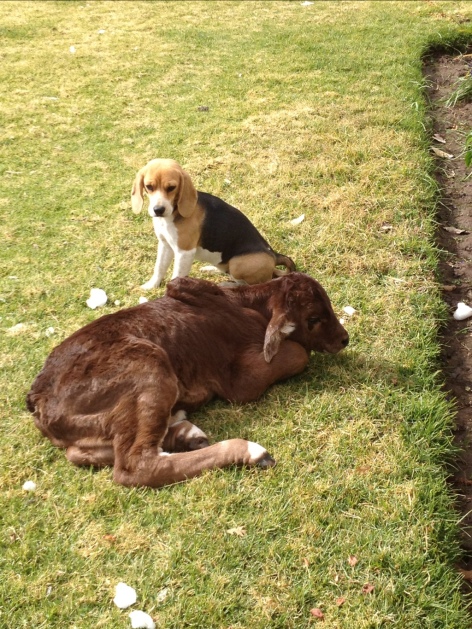 Resting on the grass with Coco.

Then Quentin arrived home with another little one whose feet had frozen during the night. She couldn’t stand or walk and would’ve died left like that. We immediately got the blow dryer out to thaw her feet so that she could go back to her mom as soon as possible. It was obvious that she was much stronger than the other little one.

And then there were two!

Fortunately she got up quite quickly and started stumbling around the kitchen island. After a few rounds she was walking more confidently and ready to go back to her mom. We checked on her this morning and although she looks quite weak she is drinking. Phew! 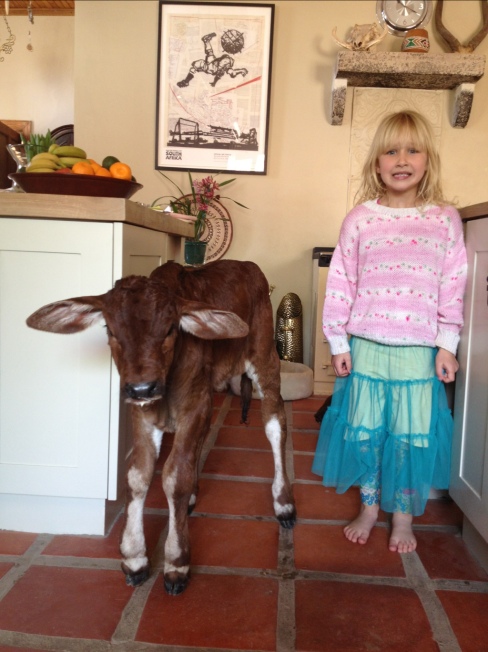 Eeck! There’s a calf in my kitchen! 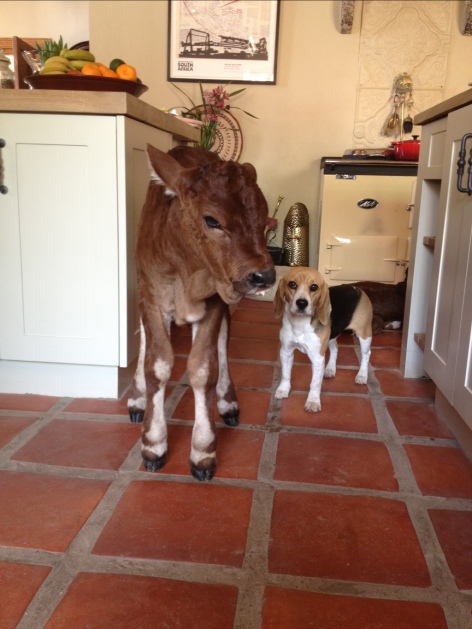 We carried on trying with the first calf, but he really was not looking good. He just wouldn’t drink from the bottle so eventually Quentin had to pour the milk down his throat just to get some sustenance in him.

It just wouldn’t drink from the bottle.

That night we knew that things were not going to turn out well. He was not getting up and his breath became more and more laboured. All we could do was put him in front of a warm fire and stroke him. 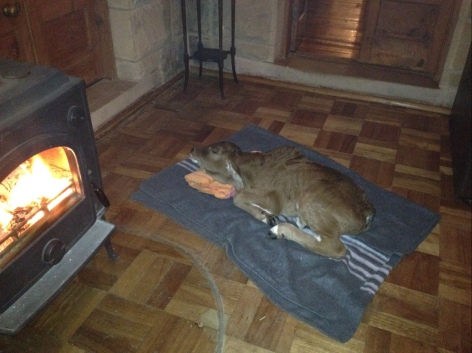 Sleeping in front of the warm fire.

This morning he was gone. Hopefully a more peaceful death than he would have had out in the cold night. The kids were sad, but all along we had said that he might not survive. We all agreed that the best thing to do would be to put him back with the elements and let nature take its course. Perhaps we shouldn’t have interfered in the first place.

My father-in-law says this is the coldest weather he has experienced on the farm in his 60 years of farming. I think the main difference is that we usually have dry cold, which the animals can handle, but as soon as it is wet and cold they really struggle. In total, Quentin lost five calves in the past few days – one disappeared before anyone saw it, two disappeared after birth (suspected jackal), one died during birth, and one died on our kitchen floor in front of the Aga. R.I.P. little calves. Hope you enjoy it up there in calf heaven.

Lot 49: VST 18-160
Some moments from the 9th Vastrap Auction on Friday! Thank you to everyone who travelled from far to attend the auction. For those following online please accept our deepest apologies for the poor connection. We had some unforeseen technical issues that we just could not resolve. Thank you to @swiftvee for making the most of a difficult situation and to the bidders who stuck with it despite the frustrations. 👏👏
Come and get fudge at Vastrap on Friday!!! We are so looking forward to a fun auction day which also happens to fall on Quentin’s 50th birthday!! 🎉🎉 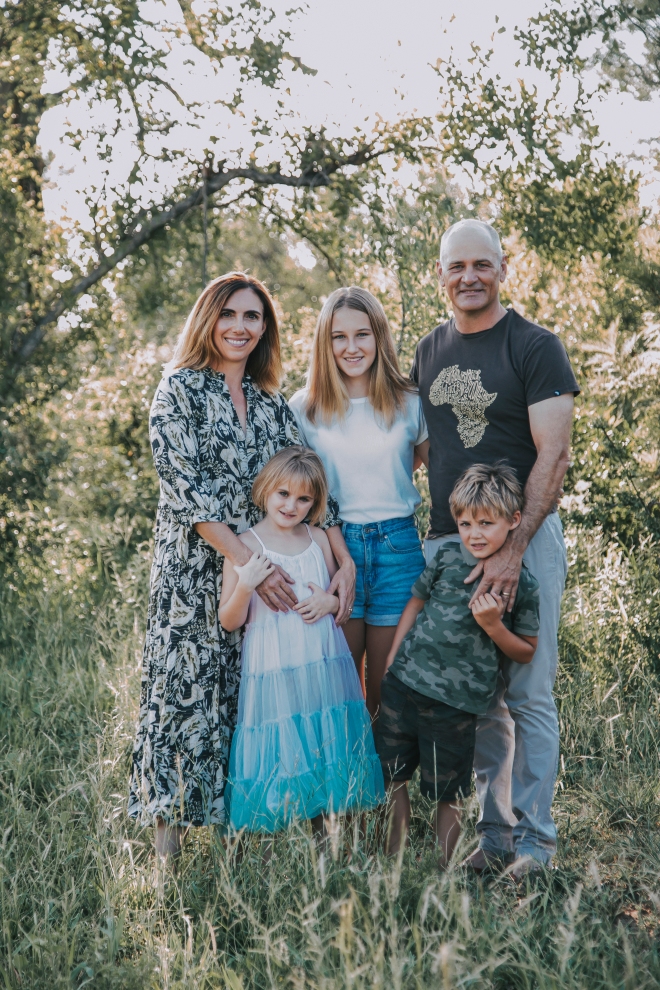