The commercial future of the Boran: Cross-breeding

I started Vastrap Boran in 2010, after farming commercially with Angus cattle for 10 years. My love affair with the Boran was very dramatic and almost instantaneous, but I did not take the decision to start a Boran stud lightly. As part of my research I visited several studs around the country, attended auctions and travelled to Kenya to learn first hand about the breed from the real experts and to witness them in their natural environment. In the end, I was very happy to conclude that the Boran are not just beautiful animals full of character, but they do also make business sense.

The following practical characterisics of the Boran finally won me over:

Before starting Vastrap Boran, my own commercial herd consisted of Angus cattle. As the biggest breed in the world, Angus have many benefits including that they are polled, have great fertility and are very sought after by feedlots. It seemed obvious to me to start a cross breeding programme with the Boran and Angus to try and marry their positive attributes while eliminating some of their weaknesses. This is not with the aim of creating a new composite breed, but rather a continuous cross-breeding programme that enables one to take advantage of the hybrid vigour resulting from the use of pure bred Boran and Angus bulls, which are so far apart genetically.

The design of my cross-breeding programme has been informed by the following factors that I have learned from experience over the years.

With these factors in mind, my staring point is to have females in my commercial herd that are 75% Boran and 25% Angus. The advantage of this is that they will be hardier than the pure Angus and eliminate problems such as bad eyes and susceptibility to insect- and tick-borne diseases. They are also slightly smaller than the pure Angus, which allows one to have a higher stocking ratio, but they will also be slightly beefier/larger than the pure Boran. These cross-bred cows will enable my commercial herd to be larger, have less input costs and less general health problems and fatalities.

In July 2015, Vastrap Boran participated in a feedlot trial for crossbred Boran weaners with Sparta Beef (see “Crossbred Boran feedlot trial with Sparta“). We were given a very competitive price of R20.50/kg. Vastrap’s group of 108 animals averaged 223kg and included 20 females, thus giving us R4,577.65 (ex-VAT) per weaner.The results were great news for the Boran breed. In particular, the feed conversion rates (FCR), both during backgrounding and the feedlot phase were better than the feedlot average and the slaughter percentage was also excellent. Sparta management was very pleased and positive about the results of this particular group of Boran crossbred weaners.

I plan to use pure Angus bulls to breed on these F2 Boran females. This would produce a calf that is 62.5% Angus. Not only would this be a product that is a well suited to sell to feedlots, but due to both the hybrid vigour and the fact that Angus bulls used are larger than the cows, the calf should wean a large percentage of its mother’s body weight. This should result in a much higher kilogram of meat per hectare than in any pure bred system. The heifers that are retained from this particular cross-breeding programme will be strictly selected for size, to prevent the breeding stock getting too large and then cross-bred back to pure Boran bulls. Again, using pure Boran bulls will retain the hybrid vigour, producing a calf that has both a high weaning ratio relative to the mother weight and a calf acceptable for the feedlots.

I have been very impressed with the phenotype of the F2 Boran/Angus crosses. They are a stocky animals, short in the leg, but with loads of capacity. By next year, I will have enough F2 crosses to put back to the Angus bull for the first time and hopefully I will be able to report back favourably on the results of my continuous cross-breeding programme. 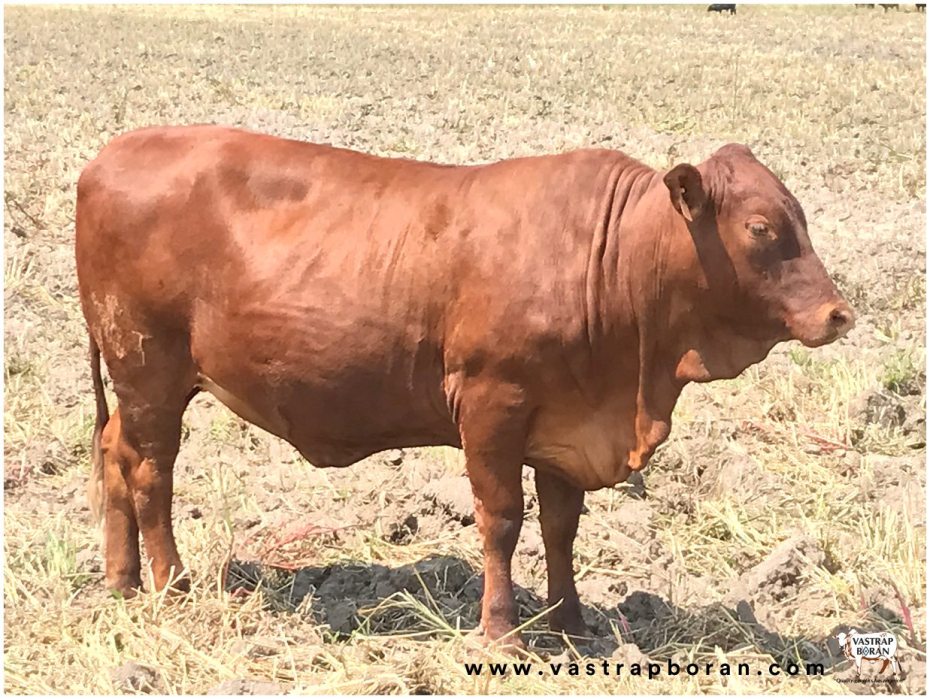 18 thoughts on “The commercial future of the Boran: Cross-breeding”